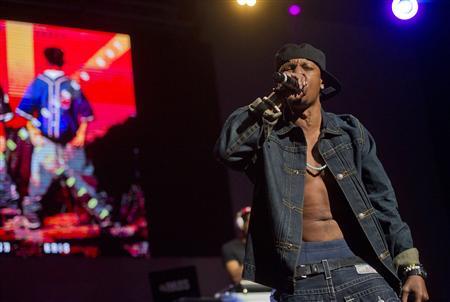 Since the 1990s the 38-year old singer/songwriter, born and raised in Trinidad, has worked towards taking soca (calypso's uptempo derivative) to a wider market through his high-profile collaborations (Wyclef Jean and Lil Jon), the integration of rock, pop, dance and hip-hop strains into his soca brand and the development of an exhilarating stage show that juxtaposes his adrenaline-pumping singing and wining (a pelvic-gyrating movement), skills with masqueraders, dance troupes, steel bands and pyrotechnics suggestive of T&T's multi-faceted, kaleidoscopic carnival celebrations.

The first single to come from Montano's AZ deal will be a remake of "Mr. Fete" due this summer, featuring French R&B singer Matt Houston. "We are thrilled to be working towards taking this incredible artist's music to the world," Creuzard told Billboard.biz on the phone from his Paris office, minutes after Montano's contract signing there. "We will use specific domestic acts to push Machel forward territory by territory. We are planning several new versions of his existing tracks as well as brand new material for his album."

It's not Montano's first foray with the majors. In 1995 Montano signed to US independent Delicious Vinyl and in 2000 he secured a deal with Atlantic Records; both labels sought to turn Montano into a pop artist by diluting his music's distinctive carnival/soca roots; neither released the albums for which he was contracted. AZ's approach will be quite different, as Montano explained from Paris. "They're not changing the music, because they love soca in its raw element, so we will continue to release great music with a major label's support."

Montano and his 2013 carnival songs were heartily received at the myriad fetes (parties), concerts and competitions that have for decades made carnival the focal point of T&T's music industry and a viable springboard to international careers for the island's calypso and soca acts. Montano captured the 2013 Groovy Soca Monarch crown performing "The Fog" and, in the Power Soca Monarch competition (for faster-paced songs), he tied for first place with his mentor Super Blue, a six-time Soca Monarch winner. Both contests were held during a single show held on Friday, February 8th at Hasely Crawford Stadium. Returning to the competition after a 13-year absence, Super Blue was the crowd's sentimental favorite, but Montano's elaborate, energetic rendition of his hit "Float" was unbeatable. Supported by a cast of dancing carnival characters and superheroes, Montano, dressed as Superman, brought the song to a soaring conclusion, flying high above an astonished crowd, a stunt coordinated by Doug Miller of Los Angeles based entertainment company Zen Arts, hired by Montano specifically for the competition.

Montano's carnival and post-carnival triumphs, however, are bracketed by ongoing legal concerns. On December 10, 2012 he was found guilty in of four counts of assault and use of obscene language stemming from a 2007 altercation outside Port of Spain's Zen Nightclub. Soca artists Rodney "Benjai" LeBlanc, Joel "Zan" Feveck and Montano's drummer/producer Kernal Roberts (son of the late, venerated calypsonian Lord Kitchener) were also charged but only Roberts and Montano were found guilty. On February 25th Montano and Roberts were sentenced, each fined approximately $4,000. State attorney George Busby has appealed on the grounds the magistrate's sentences were too lenient while defense attorneys Dana Seetahal SC and Keith Scotland, representing Montano and Roberts respectively, have also appealed citing inconsistencies with the ruling in favor of Feveck and LeBlanc.

One of Montano's hallmarks is that the artists spares no expense for lighting, sound and special effects for his performances during carnival competitions and for his Machel Monday concert, the latter co-produced with his business manager, Anthony Chow Lin On -- also manager at Port of Spain's 96.1 WEFM -- at a cost of $2 million TT ($312,000 US). "We want a carnival fete with the special effects of a Guns N' Roses or Metallica concert, representing T&T as a first world nation in entertainment. Our formula has worked; predictions this year were that the fans would turn their backs on us but we proved them wrong," Montano commented following his four-hour performance at Machel Monday which spanned his 31-year career, from "Too Young to Soca", recorded at a precocious age 10, through numerous carnival 2013 hits including "Indian Gyal" a spicy duet with Drupatee Ramgoonai, T&T's queen of chutney-soca, a lively fusion of the musical expressions of Trinidad's dominant African and Indian ethnicities.

New York-based Caribbean music promoter Dahved Levy, the host of Caribbean Fever on New York City's WBLS 107.5, cites Montano as "the only Caribbean artist that puts a big percentage of his pay towards his production, insuring an exciting show." Levy has promoted several Montano concerts including two sold out dates at Madison Square Garden's Wamu Theater and at Brooklyn's Barclays Center on December 17th, a week after Montano's guilty verdict was announced. "Rumors flew that Machel couldn't travel to New York but we got the word out on the radio and our website and met our capacity of 8,000 seats," Levy noted.

Expanding his successful Caribbean brand, Montano now owns a record store in Trinidad's Piarco International Airport, a hub for his music and merchandise, including his 3 Zero Rum brand, launched at carnival 2012. He makes his acting debut playing a soca star and the love interest of Indian actress Priya Anand in the forthcoming film "Scandalous", described as a Bollywood-style musical comedy.

Meanwhile, he continues to push soca's boundaries. On December 29th, with a 48-hour break following a concert in Barbados and prior to a Las Vegas recording session with Boys II Men, Montano flew to South Africa to record the single "Possessed" with storied African chorale group Ladysmith Black Mambazo.

"We are considering 'Possessed' for the AZ album, but will continue to independently explore its global potential," Montano acknowledged. "It was an intense time hooking up these collaborations; we want them to matter to the world, not just to T&T's carnival."

Mar 27 Interesting times for Soca Monarch in Trinidad and Tobago

Caribbean Prestige Foundation for the Performing Arts Chairman, William Munro, speaking exclusively this afternoon with ETCETERABUZZ.COM said he was tired and fed up of it all.

William Munro says he is fed up.

Munro, the franchise holder of the international competition hosted across the Caribbean, during carnivals in St. Vincent and the Grenadines, Grenada, and T&T among other Caribbean destinations, said he would not sell the T&T mecca franchise to any other country- maintaining, “the competition belongs to the people of Trinidad and Tobago.”

On Tuesday, news broke that Munro- a promoter who has hosted numerous events, making a name for himself in entertainment for over two decades, would be bowing out of the cultural competition. He told us he would now leave it up to the government of Trinidad and Tobago, to see first hand, the hard work, overall financial expenditure and dedication, that goes into creating what he terms, a competition that is still growing.

With artistes still awaiting their cheques from this year’s competition, Munro said he was told by ministry officials that the entertainers would be paid by next week. “The public thinks a lot of money is made but they don’t truly understand what goes into making this show happen every year,” said Munro, explaining that the product is one that has enhanced the country and promoted tourism for many years. He emphasized that many jobs are created from a show of this magnitude and caliber, noting that it took $23 million to pull off the competition in 2012.

Lamenting that even some of the artistes hardly ever walk away with anything following their large-scale presentations, the CPF boss said it has been an investment for the enhancement of the country and to help the tourism industry strive. He argued that even the product that is Carnival has deteriorated and said he is saddened and disappointed by the lackluster approach by various governments to the country’s cultural and tourism attractions. “They need to be serious. I am not hitting any particular government but they need to be serious about things of this nature- things that bring attention to the country. The world is not accepting mediocrity and so we have always worked hard at building the product every year.”

When asked whether the competitions across the other Caribbean islands would continue, Mr. Munro said they would. He said while Barbados had approached him some time ago, to purchase the Mecca competition, he had indicated that the show belonged to the people of Trinidad and Tobago and added that this still stands.

Stay tuned to ETCETERABUZZ.COM, we’ll be bringing you more coverage of this story in the hours and days ahead.