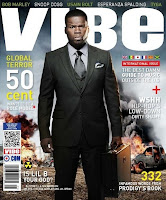 The issue  will also focus on other interantional , such as looking  at how Akon kicked off the international craze, UK music makers Tinie Tempah, Jessie J and Mark Ronson and Morocco’s RedOne.

According to  VIBE Editor-in-Chief Jermaine Hall “We wanted to introduce the readers to some leaders in the international space that helped craft the sound as well as artists that are successful outside the US.”

More in this category: « Tanya Stephens gives confident lecture Wyclef on show still »
back to top